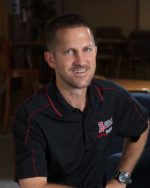 What's your favorite part of your job at Dawson Community College? Getting to provide opportunities for young people to have a great experience like I did when I was a student at DCC!

What's your proudest moment during your time at Dawson Community College? Every time I get to see my players graduate and move on to the 4-year level

What's the best thing about Eastern Montana? Warm, friendly people who truly care about each other

What would the title of your autobiography by? The Road Less Traveled

What is your favorite way to spend a Saturday? With my family at the park or beach or gym

What is the last book you read? The Energy Bus

What is the last concert you attended? Garth Brooks

What are two things you can't live without? God and my family

Joe Peterson has had 3 successful years as the Head Men’s Basketball Coach at Dawson Community College. He took over in Jun 2015 for legendary coach Don Mast, who totaled 424 wins and 330 losses in his 25 years at the helm. In three years, Coach Pete has a record of 53-43 and guided the Bucs to the Regional Championship Game in 2 of his 3 years. In his first season, Coach Pete’s Buccaneers finished in 2nd place in the Mon-Dak Conference and reached the Region XIII Championship game, finishing just a few point short of qualifying for the NJCAA Division I National Tournament in Hutchinson, Kansas. This past season was his best season yet as the Bucs went 24-8, finished 2nd in the Mon-Dak Conference, and once again reached the NJCAA D1 Region XIII Championship Game. Out of over 200 schools in the NJCAA, Dawson finished the season in the top 20 in points, offensive rebounds per game, defensive rebounds per game, and total rebounds per game. They went 15-2 at home on the season.

Joe played for Coach Mast and the Bucs from 1994-1996. In his sophomore year, he captained the Bucs to a 22-6 record, as well as a North Sub Region Championship. He was named to the All-Region IX team and the all Mon-Dak team. He received the President’s Award during his graduation from DCC. Joe went on to finish his playing career at Rocky Mountain College where he was All-Frontier Conference first team performer and earned NAIA All-American honors. He was inducted into the Rocky Athletic Hall of Fame in 2011. At Rocky, he earned a Bachelor of Science in Math Education.

After finishing his playing career, he taught at Billings West High School and coached at Rocky. From there, Coach Pete moved on to coach at the Division I level when he joined Coach Mike McConathy’s staff at Northwestern State University in Natchitoches, Louisiana where he earned a Master’s Degree in Sports Administration and helped lead the Demons to their first ever NCAA Tournament appearance and first ever NCAA Tournament win in 2001.

After two successful years at NSU, he was hired as an Assistant Coach at Charleston Southern University working for legendary coach Jim Platt from 2001-2003.

In 2003, Coach Pete left his life in America to serve at a school for AIDS orphans in rural Kenya for what turned out to be 11 years. He worked as a teacher, coach, and administrator at Christ’s Gift Academy. In 2009, he started the Suba Lakers Soccer Club for girls in Kenya to develop their talents, teach them life skills, and encourage them to stay in school.

Joe married his wife Daneen in May of 2013, and they continued serving in Kenya until the end of 2014.

Coach Pete brings with him over 20 years of coaching experience at various levels, including 4 years at the NCAA Division I level. His focus as a coach is to inspire his players to give maximum effort, develop a positive attitude and work together as a team to achieve success in basketball, in the classroom, and in life.

What coaches are saying about Joe Peterson:

Buzz Williams at Virginia Tech says, “With his experience and success…he has been exposed to great systems and great coaches…Joe can handle the Xs and Os and will be good at preparing his team for success, but more significant than wins and losses, he understands the importance of preparing his players for success in life.”

Jim Platt at University of Tulsa says, “Joe is a very gifted individual who is an excellent college basketball coach…He knows the game extremely well and is an excellent teacher.”

Mike McConathy at Northwestern State University says, “Joe, an extraordinary person and coach, possesses so many skills to be a great leader and teacher of young men…Joe is a rare gem!”

Mark Slessinger at University of New Orleans says, “Simply put, Joe is one of the best…I can say with full confidence that he is a person of integrity and high moral character and has all the qualities that are sought after as a teammate, colleague and leader in higher education.”

Bill Dreikosen at Rocky Mountain College says, “You will not find a guy of higher integrity that works harder and understands what it takes to be truly successful in all of college athletics…Joe has a large network of basketball connections across the country and will be able to recruit high quality players to Dawson Community College…Wherever Joe has been he has raised the level of the bar…He’s a winner!